Notes on The Intelligent Investor: Chapters 1 & 2 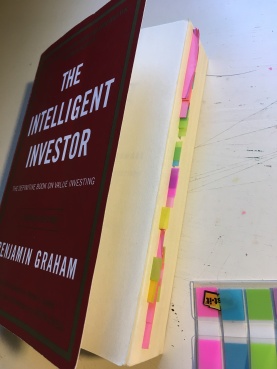 I had been starting to read “The Intelligent Investor,” by Benjamin Graham with commentary by Jason Zweig for some time and had soon after also set it aside for a period of time. I’ve decided to pick it back up again, I’ve taken a degree of interest in stocks and investing and figured who better to take advice from than Warren Buffett himself? So I watched some videos and read some articles to see what recommendations he had for resources on stocks and investment, and it appears to be that of all the books and of all the resources this would be the holy grail based on his point of view (“this” being “The Intelligent Investor”) so certainly I’d take the advice from someone who is just about the most well learned in their field as is Warren Buffet in finance.

As I’ve read so far I put tabs on key points as I read and so far the chapters that I’ve covered are filled will hoards of multicolored tabs, I hope to get rid of these by taking notes on them instead through this blog. I’ll go straight to those notes for chapters 1 and 2 here now in this particular post:

A situation that may call for a 25% proportion in leading common stocks would be in a “dangerously high” market, whereas a situation calling for 75% in leading common stocks would be during times when there’s a fall in stock prices (if I’ve understood the advice the I’ve read so far in this book, then I would venture that this would be in the case of a bear market, which would basically be a general fall in the stock market-the most extreme example of this being the Great Depression) (22).

In general I have many questions regarding buying silver and gold. Sometimes it seems like a trend for the old world, but on the other hand my gut tells me that no matter how it may be seen outwardly, silver and gold will always be worth owning. In this day and age the economy, at least the American one, is based on debt. There is essentially nothing backing the dollar, whereas in the past money had always been backed by gold.

I digress. The reason why I even turned to the topic of gold and silver is because in the book there is a footnote in the second chapter that touches on this subject that I’ll include here:

“The investment philosopher Peter L. Bernstein feels that Graham was “dead wrong” about precious metals, particularly gold, which (at least in the years after Graham wrote this chapter) has shown a robust ability to outpace inflation. Financial adviser William Bernstein agrees, pointing out that a tiny allocation to a precious-metals fund (say, 2% of your total assets) is too small to hurt your overall returns when gold does poorly. But, when gold does well, its returns are often so spectacular-sometimes exceeding 100% in a year-that it can, all by itself, set an otherwise lackluster portfolio glittering. However, the intelligent investor avoids investing in gold directly, with its high storage and insurance costs; instead, seek out a well-diversified mutual fund specializing in the stocks of precious-metal companies and charging below 1% in annual expenses. Limit your stake to 2% of your total financial assets (or perhaps 5% if you’re over the age of 65).” (55-56)

I also marked for myself some additional reading material that I might consider taking a look at at a later time of: “”Stanley Fisher, Ratna Sahay, and Carlos A. Vegh, “Modern Hyper-and High Inflations,” National Bureau of Economic Research, Working Paper 8930, at https://www.nber.org/papers/w8930.” (60)

I also marked another source for myself about TIPS (treasury inflation-protected securities), which apparently is a safer option for investment during times of inflation and the book provides further reading in this specific topic on:
www.federalreserve.gov/Pubs/feds/2002/200232/200232pap.pdf.

Key Points from the Reading: