“Never discourage anyone who continually makes progress, no matter how slow.”

In this short post I’m just going to give two ways to clean a microwave:

The first is by using a solution of one part vinegar and one part water, 1-2 cups of the mixed solution should be adequate. After putting this solution into a microwave safe container (I almost always use a pyrex or a glass baking dish), the solution needs to be heated for a few minutes in the microwave. I see many sources on the internet suggesting 3 minutes, but I usually do at least 5 and will sometimes repeat heating the solution as I wish.

The second method is nearly identical to the first, but rather than vinegar it calls for water and one lemon. Whereby in this method the lemon juice is squeezed into the water and the lemon is left in the water/lemon juice mixture and heated in the exact same manner as mentioned above for the water and vinegar mixture.

The whole point of either of these two methods is to cause the steam from the given solution to soften any debris within the microwave to make it easier to clean and wipe down. The only thing left to do it the wiping and scrubbing in the microwave itself.

Of course also remember to be careful with the hot liquid while you clean.

Ways to Keep Our Brain Healthy as We Age (the Physical)

This is going to be a post on some notes I’ve taken from the book “60 Ways to Keep Your Brain Sharp” by Bonne Beth Sparrman, BSN. The book is divided into 4 sections of: physical activity and related preventative measures, nutrition, intellectual stimulation, and social and spiritual stimulation. This bog post will only be covering select parts from the first section of “Physical Activity and Related Preventative Measures”. In this post I’ll be emphasizing my favorite sections and tips and make short little notes on the remaining bits:

This is the list of the essential four things I feel I need to get done whenever I endeavour to clean the house, as a sort of foundational base clean or starting point from which I can later move on to more specific areas. These are my four:

The order matters as well for there is a reason for this order. Laundry is first so that it runs while I work on my other chores, dishes are next because getting them washed clears up more kitchen space and often I can wipe up the counter as I do so and since the next step on the list is the floor I can wipe the crumbs right onto the floor seeing as it would need cleaning next. If the floor space in the house is neat and clean most of the house will already look nice and tidy. Last is the trash seeing as this will have likely filled up as I cleaned and as the day has gone on. This isn’t any sort of deep clean list, this is just a starting point for cleaning generally speaking, at least in my mind these would be the logical first four steps to house cleaning endeavors.

“Don’t settle: Don’t finish crappy books. If you don’t like the menu, leave the restaurant. If you’re not on the right path, get off it.” 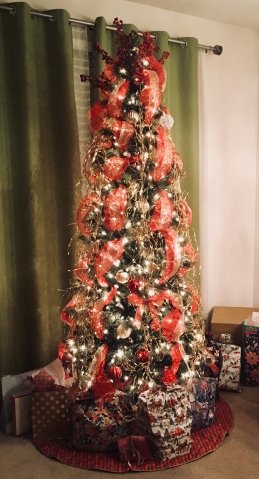 Though I consider myself very far from where I’d want myself to be as far as green living goes I do feel I’m making some small progress, the example I’m giving now is of the reusable gift bags. I purchased 6 so far (three Christmas themed, one floral, one Alice in Wonderland, and one birthday), all from Etsy shops (from Not Paper Bags and Heirloom Gift Bags Plus). The first time I used the bags was for my sister’s birthday and now we’re using it for Christmas again. I told my mom that from now on we’d use the reusable gift bags and surprisingly she was perfectly happy to go along with it, the only problem is I’ve yet to buy enough bags still. It’s definitely made a difference though, as even with an incomplete stockpile of gift bags, the few I’ve purchased so far are able to go a long way. So it’s my hope that my family and I will grow and continue this newfound tradition and it’s my hope that you might consider trying it out in your own home with your family as well dear reader. Also might I add on a completely different tangent that I think my mom did a lovely job of decorating our tree this year with her ribbon arrangement, the gold tassels and the top of berries.

I should have made this post much earlier, but other things were on my mind and procrastination is my specialty. Better late than never though and I still want to make this seeing as today is the last day of Autumn. My mother and I enjoy decorating for this season and I figured I’d share our decor for this year, plus it’ll give me the chance to delete some pictures from my phone seeing as posting them here will result in duplicates.

“The ultimate test of a man’s conscience may be his willingness to sacrifice something today for future generations whose words of thanks will not be heard.”

Dirtiest Places in the Home

I was just going through my phone and found some notes I made from an article on the dirtiest places in most homes. In my notes I referenced the article beforehand and I’ll place the link right here of the article titled “The 9 Dirtiest Spots in Your Home” by Deborah Weatherspoon. When I made these notes I made them to have a reference of places that I should focus to clean in order to best reduce germs in the home most efficiently so that my focus and energy is well directed. I mostly just copied off the lists provided in the article for my own reference, so I’ll just copy it off almost the same on here as a reference for myself. What I’m beginning to like about this blogging thing is that it helps me to organize everything in one place. Anyhow to the dirtiest places.

First off, take off shoes before entering the house…as far as the dirtiest places they are:

2.) Knobs, handles, and switches (disinfecting wipes once each week-ideal to use a new wipe for every spot)

5.) Laundry-if clothes sit in the washer for more than 30 minutes: rerun; if going to a laundry mat: clean washer with disinfecting wipes prior to using machines.

Notes on The Intelligent Investor: Chapters 1 & 2

I had been starting to read “The Intelligent Investor,” by Benjamin Graham with commentary by Jason Zweig for some time and had soon after also set it aside for a period of time. I’ve decided to pick it back up again, I’ve taken a degree of interest in stocks and investing and figured who better to take advice from than Warren Buffett himself? So I watched some videos and read some articles to see what recommendations he had for resources on stocks and investment, and it appears to be that of all the books and of all the resources this would be the holy grail based on his point of view (“this” being “The Intelligent Investor”) so certainly I’d take the advice from someone who is just about the most well learned in their field as is Warren Buffet in finance.

As I’ve read so far I put tabs on key points as I read and so far the chapters that I’ve covered are filled will hoards of multicolored tabs, I hope to get rid of these by taking notes on them instead through this blog. I’ll go straight to those notes for chapters 1 and 2 here now in this particular post:

A situation that may call for a 25% proportion in leading common stocks would be in a “dangerously high” market, whereas a situation calling for 75% in leading common stocks would be during times when there’s a fall in stock prices (if I’ve understood the advice the I’ve read so far in this book, then I would venture that this would be in the case of a bear market, which would basically be a general fall in the stock market-the most extreme example of this being the Great Depression) (22).

In general I have many questions regarding buying silver and gold. Sometimes it seems like a trend for the old world, but on the other hand my gut tells me that no matter how it may be seen outwardly, silver and gold will always be worth owning. In this day and age the economy, at least the American one, is based on debt. There is essentially nothing backing the dollar, whereas in the past money had always been backed by gold.

I digress. The reason why I even turned to the topic of gold and silver is because in the book there is a footnote in the second chapter that touches on this subject that I’ll include here:

“The investment philosopher Peter L. Bernstein feels that Graham was “dead wrong” about precious metals, particularly gold, which (at least in the years after Graham wrote this chapter) has shown a robust ability to outpace inflation. Financial adviser William Bernstein agrees, pointing out that a tiny allocation to a precious-metals fund (say, 2% of your total assets) is too small to hurt your overall returns when gold does poorly. But, when gold does well, its returns are often so spectacular-sometimes exceeding 100% in a year-that it can, all by itself, set an otherwise lackluster portfolio glittering. However, the intelligent investor avoids investing in gold directly, with its high storage and insurance costs; instead, seek out a well-diversified mutual fund specializing in the stocks of precious-metal companies and charging below 1% in annual expenses. Limit your stake to 2% of your total financial assets (or perhaps 5% if you’re over the age of 65).” (55-56)

I also marked for myself some additional reading material that I might consider taking a look at at a later time of: “”Stanley Fisher, Ratna Sahay, and Carlos A. Vegh, “Modern Hyper-and High Inflations,” National Bureau of Economic Research, Working Paper 8930, at https://www.nber.org/papers/w8930.” (60)

I also marked another source for myself about TIPS (treasury inflation-protected securities), which apparently is a safer option for investment during times of inflation and the book provides further reading in this specific topic on:
www.federalreserve.gov/Pubs/feds/2002/200232/200232pap.pdf.

Key Points from the Reading: